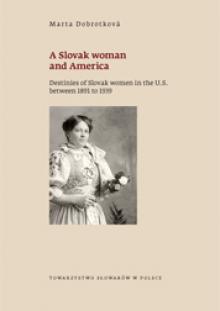 In the first phase of emigration (1880s) men were migrating first and then they were followed by women. It is interesting that since the men crossed the Atlantic several times in a row they were given a wonderful nickname – ‘the birds of the sea’. Following these emigrants, young women who could not find a life partner at home and married women following their husbands were coming. Like men, women belonged to different social groups too. Wives of evangelical priests, traders, and some representatives of associations and organizations belonged to intellectual groups. Except the middle classes, such as merchants and craftsmen, most of the expatriates can be classified as based in lowest social layers. These were miners, steel workers and auxiliaries.

This present work has an ambition to deal with a marginal phenomenon of emigration, but in particular with the issue of Slovak women in the U.S., the emergence of the first Slovak female associations, primarily the Zivena, the First Catholic Ladies Organization (Prva zenska katolicka jednota), The Ladies Pennsylvania Greek – Catholic Union (Pennsylvanska greckokatolicka zenska jednota), the Lutheran Union (Evanjelicka jednota), as well as with the development of the first Slovak female orders and congregations in America. This work also partly touches the topic of the first Czech-Slovak resistance, especially the participation of Slovak women in resistance activities.

Slovak women in America in the first stages of emigration
The emergence of the first female societies
The Zivena
The First Catholic Slovak Ladies Union
The Youth Care
The Ladies Pennsylvania Slovak Roman and Greek Union
The Evangelical Slovak Ladies Union
Women - Members of the Slovak Sokol organizations
The Slovak Spinning Women
The Slovak Bees
Slovak Women's Religious Institutes and Congregations in the U.S.
Girls High School in Danville
The Congregation of the Sisters of Charity of St. Vincent
The Province of the School Sisters of the 3rd Order of St. Francis
The Congregation of the Sisters of the 3rd Order of St. Dominic